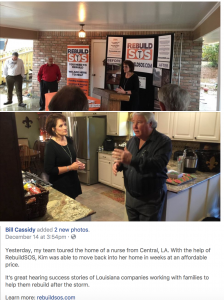 The momentum we gained from our December 13, 2016 press event at the home of one of our success stories, Kim Edwards, generated some serious buzz.  We were honored to have representatives from both Senator Cassidy and Congressman Garrett Graves’ office in attendance.

We had a news story published on BRProud by Ariana Triggs, found here.